The Long and the Short of it: Who is standing up for you? 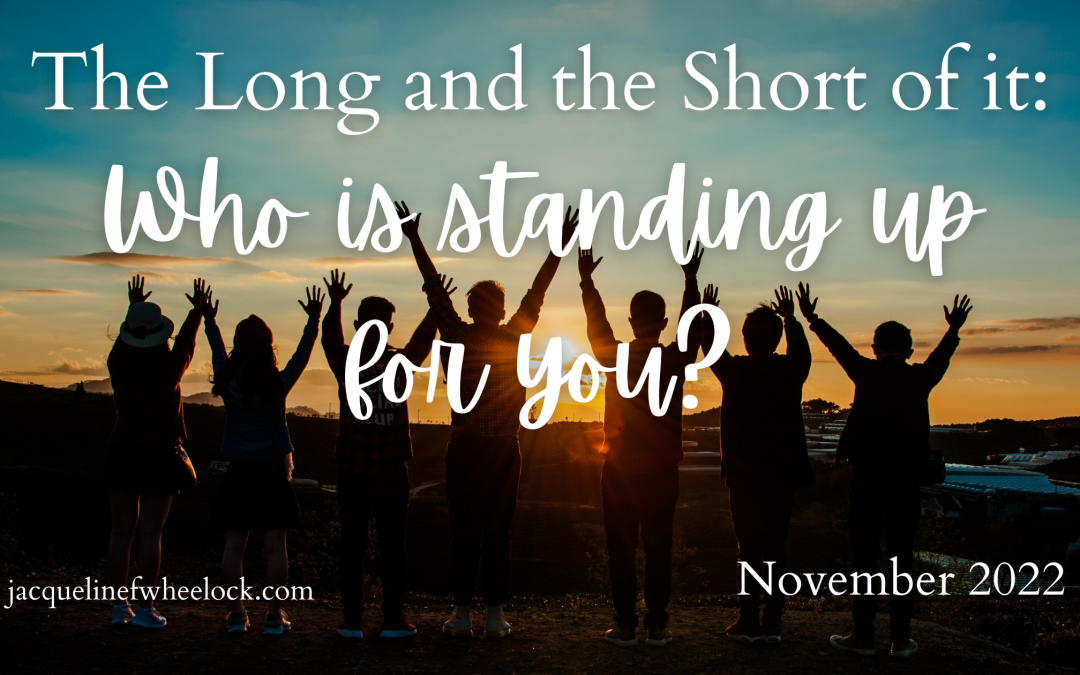 Have you ever wondered, “Who will stand up for me?”

This is the long of it:

Even when we’ve been blessed enough to successfully do the right thing for others, we sometimes find ourselves asking, “How long can I be “that person?”—the go-to girl (or guy)—the one with the solid back that always carries the burden, without occasional relief?

If you’ve read the biblical record of I Kings, you already know—and likely appreciate—that for a time, Elijah, the prophet, carried the burden for Israel. (Or at least he seemed to think so). If you’ve not read it, I promise you, it would be very much worth your time, Christian or not.

Elijah stood up for God and Israel. Big time. He was anointed by God to do some really dramatic things. Not only did he call up fire from wet wood, he taunted 450 false prophets whose laborious attempts fell flat while trying to prove they could do the same kinds of miracles in the name of the idol, Baal.

Yet in an all-too-human-fashion, after a rousing applause from the entire nation of Israel, when Elijah’s life was threatened by a single wicked woman named Jezebel, his courage failed, landing him in a desert. Literally. Like so many before and after him, his fatigue from doing right—and wrongheadedly believing he was doing it alone—turned to fear. He found himself in need of someone to stand up for him. Suddenly, he was isolated. Useless. And in the end (or what Elijah thought was the end) he collapsed.

The need for someone to hold up your aching arms, as the Israelites did for Moses in a biblical battle, is universal. That need has always been there, and it will continue to be as long as we are in these bodies.

But can you imagine? After rallying the whole of Israel, Elijah, the self-described “last true prophet of his time,” deserted his post and fled! He would have died, tired and hungry—and even whining a bit—but for the grace of the Almighty God. Nothing new there; it had always been so. It’s just that, for a moment, Elijah lost sight of who always stands up with and for him. Sound familiar?

The Short of it is this:

No matter the desert, the she-shed, or the cave (Before it was all over, Elijah spent time in a cave, too), we’re never alone. As with Elijah, the God of the Universe always has a perfect plan to rescue us. He is the only One who consistently “has our backs.” Always.

Reflection: Do you ever feel as though no one is standing up for you as you stand up for what is right? If so, leave a comment.

I am so thankful for you! Your support and encouragement mean the world to me. I want to do something special for you so I have partnered with Celebrate Lit for a giveaway just for you to build up that “To Be Read” pile!

Here is your chance to win over 40 books or a $500 Amazon card to buy a ton of books for yourself in Celebrate Lit’s Thankful for our Readers Giveaway.

The event and giveaway is going on now through November 19th.